For anyone that ran across Chief Adam Snyder, it was obvious he was a big man.  But if you were around him even for a few minutes, you realized his presence and dedication to the fire service was much larger than his physique.  The former Atlantic Beach fire chief passed away from injuries he received while on vacation in March 2019.

Snyder’s death left many with heavy hearts, not only his family and ABFD family, but the fire service across North Carolina.  One of his passions was training.  Especially technical rescue style training.

On October 10, 2019 the ECFA announced the creation of the Adam Snyder Rapid Intervention Crew Training Scholarship.  That scholarship, in the amount of $750, will be awarded to a deserving firefighter from the ECFA region so they can attend the RIC training school held at Cape Fear Community College.  That scholarship will begin in 2020.

At the October ECFA meeting, Atlantic Beach Fire Chief Mike Simpson and Deputy Chief Casey Arthur were on hand to accept a plaque commemorating the scholarship for the family and department. 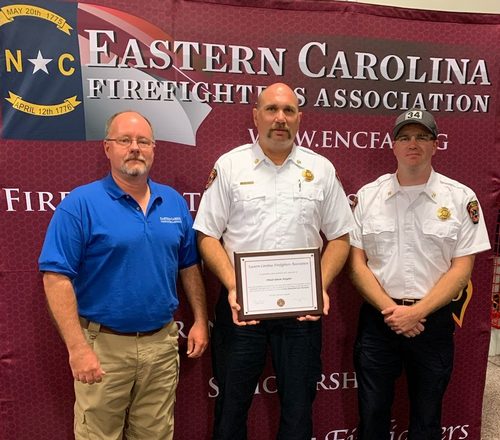 Greenville, N.C. Fire/Rescue is hiring. See below if you are interested in a fast paced career.🚒 NOW HIRING 🚑 This could be YOU!
Visit GreenvilleNC.gov to apply to become a Greenville Fire/Rescue Firefighter/EMT Trainee.
#ThiscouldbeYOU #firefighter #EMT #NowHiring #fireservice #firerescue ... See MoreSee Less

What are you doing on #firstresponderdayNorth Carolina First Responder Day

Raleigh— In 2017 the NC General Assembly designated September 11thof each year as First Responder Day, making it an official State holiday. The date of September 11thwas chosen in recognition of the monumental sacrifices made by first responders at the World Trade Center attack in New York. According to Tim Bradley, Executive Director of the NC State Firefighters’ Association (NCSFA), there are over 50,000 firefighters, both career and volunteer, in North Carolina serving 1,318 fire departments. “After the attacks on 9/11/01 we vowed to never forget the sacrifices made that day by each and every first responders, 343 of whom were firefighters. Marking this day as a State holiday will keep the memory of those sacrifices with us, and continue to honor those who serve their community every day.”

According to Quentin Cash of Shelby and Cherryville Fire Departments, who serves this year as President of NCSFA, “20 years after the attack on the twin towers we now have a new generation entering the fire service who may not have been alive during the devastation we all remember from that day. It is our responsibility to educate and mentor these new and future generations so they too will never forget the sacrifices made that day and take pride in the jobs they do for the members of each of their communities.“

For more information, press only:

At our August meeting we awarded our annual scholarships to some very deserving students. The scholarship winners were:
Richard Leech Scholarship
Lukas Brown - Pin Hook VFD

Congratulations to all! ... See MoreSee Less

Congratulations to Carter! I hope he is all settled in at Campbell!

We were honored to participate in this mornings memorial service. The North Carolina Fallen Firefighters Foundation did a great job honoring our fallen! ... See MoreSee Less

If you’re on the Wilmington area tomorrow, they would love your support! ... See MoreSee Less